The award winning London based soprano from Melbourne, Australia.

A little about me

Emily Blanch was born in Melbourne and is a graduate of the Victorian College of the Arts and the Guildhall School of Music and Drama. While still in Australia Emily won the Australian Singing Competition and the McDonald’s Aria, which led her to move to London to take up a scholarship at the Guildhall. She has studied with Janice Chapman and continues with Raymond Connell.

Emily has worked with Opera Holland Park for a number of seasons including the High Priestess in Aida and as the Young Artist Miss Jessel in Britten’s The Turn of the Screw. She has also been a returning member of English Touring Opera performing Eleonora in L’assedio di Calais, Cilla in Waxwings, a production for children with special education needs, and as a member of the ensemble. Other performances include Fiordiligi with Pop Up Opera, Wellgunde and Ortlinde in Fulham Opera’s Ring Cycle and Eudora in Bellisaro for Chelsea Opera Group. Emily was a finalist in Fulham Opera’s inaugural Verdi Prize 2015.

Emily is currently performing a dream role as Amelia in Simon Boccangra for Fulham Opera. In April she will reprise her role as Ortilinde for FO in an orchestral workshop after which she begins with Pop Up Opera as Berta in Il Barbiere di Siviglia. 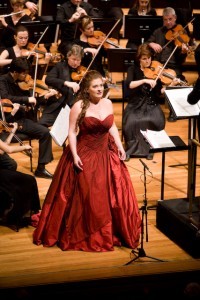 “Emily Blanch made a fine impression as the priestess”

“The role of the priestess was beautifully sung by Emily Blanch”

Maps were disabled by the visitor on this site.